We're Going For Gold this weekend! 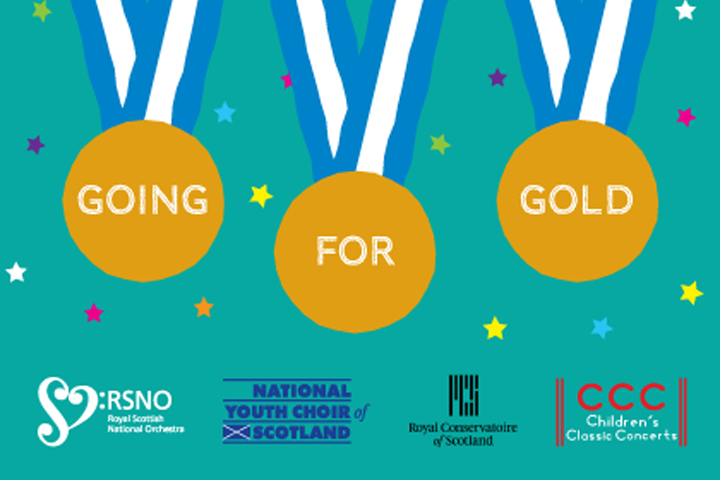 The National Youth Choir of Scotland, the Royal Scottish National Orchestra, the RSNO Junior Chorus and Children’s Classic Concert have come together in a unique collaboration to present a once-in-a-lifetime musical celebration for Culture 2014 and the Commonwealth Games.

Over the course of a very special weekend, nearly 800 young performers from all over the country will have an unforgettable chance to shine when they share concert platforms with Scotland’s national orchestra at Going For Gold, a celebration of inspiration, ambition and talent for Culture 2014 and the Commonwealth Games.

The young people will come from 13 Area Choirs of the National Youth Choir of Scotland (from Inverness to Dumfries), from the RSNO Junior Chorus and from
All Drummed Up – the Children’s Classic Concerts’ percussion project that teams children from Drumchapel in Glasgow with Juniors from the Royal Conservatoire of Scotland.

Their performances will feature in a programme of top sporting tunes and inspirational melodies that has been put together with an emphasis on fun by family favourites Owen Gunnell and Oliver Cox aka Owen and Olly of CCC. Olly has even written a special song for the occasion which will premiere at Going For Gold before being performed in India and Australia later this year.

Waving a touch of magic over the proceeding with his expert baton will be popular conductor Christopher Bell, who has devoted much of his career to promoting youth music in Scotland, both as the founder and artistic director of the National Youth Choir of Scotland and the chorus master of the RSNO Junior Chorus.

Every organisation involved is committed to promoting musical excellence and to nurturing the musical education of young people. Going For Gold has come about because everyone was determined to find a way to showcase what they do as part of the cultural celebrations for the Commonwealth Games.

“It is a wonderful idea when the mutual aims of three organisations can be met in one absolutely spectacular event.”

Children’s Classic Presenter Oliver Cox:“This is a fantastic opportunity and it is good to remember amidst all the sporting excitement that the Commonwealth Games have also provided us with the chance to celebrate culturally.”

Going For Gold, which is supported by the Big Lottery Celebrate Fund and the Big Big Sing will provide audience members from 4 to104 with inspirational performances together with the fun, games and audience participation that CCC is famous for. The musicians of the RSNO who will be dressed in their sporting finest, will be joined by pipers from the National Youth Pipe Band of Scotland in a spectacular Scottish finale that will have the audience dancing in the aisles.