See and hear the All Drummed Up story become reality…THIS WEEKEND! 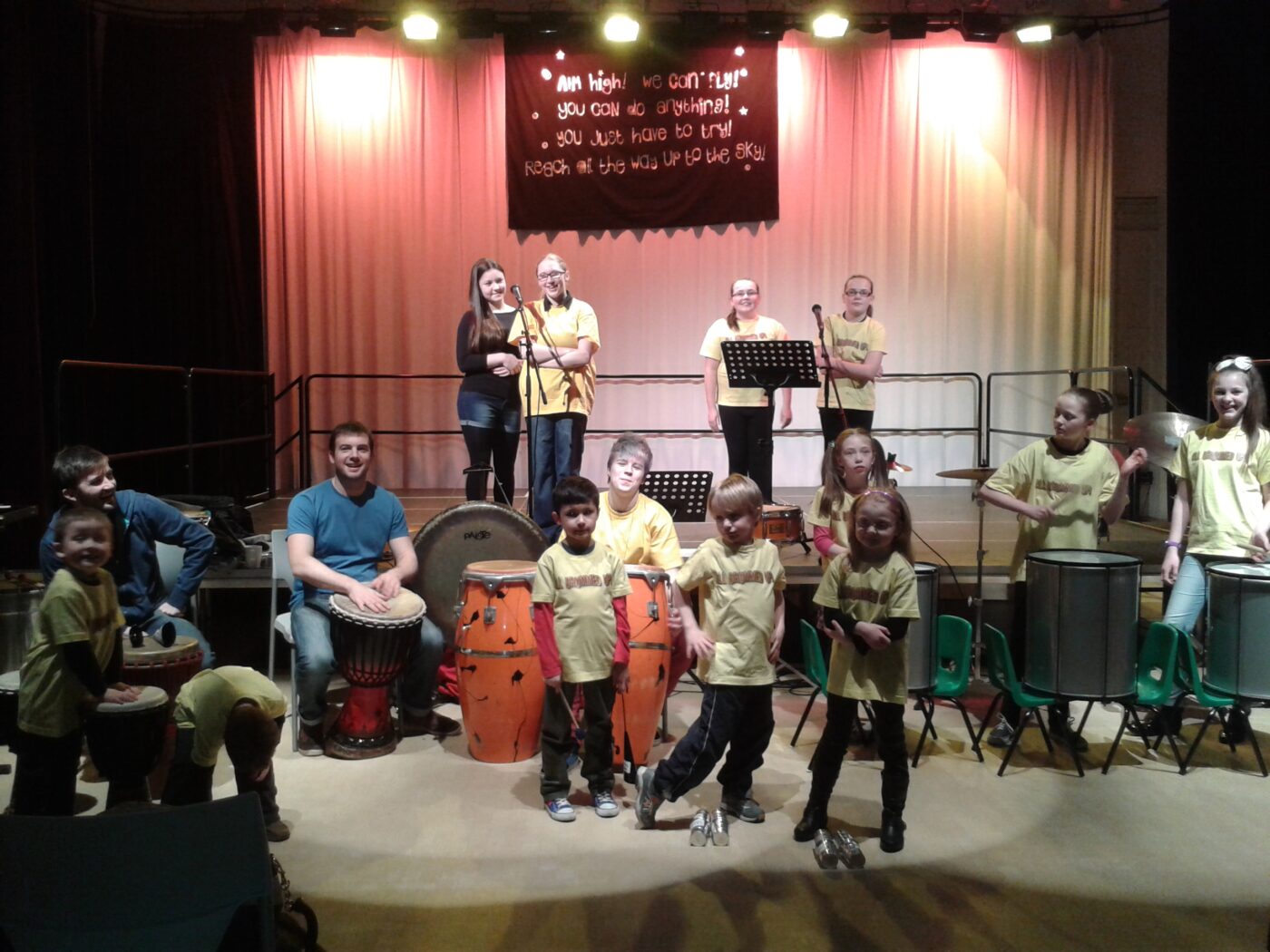 Our budding young musicians have been drumming up a storm in Drumchapel, with one aim – to Go for Gold!

For the fourth year running, we’ve teamed up with the Royal Conservatoire of Scotland to deliver after-school musical mayhem in the form of percussion project ‘All Drummed Up!’ Participants have had the chance to make new pals, dance to some beats and have a bash on a range of instruments, exploring African and South American drumming traditions.

Thanks to support from Glasgow City Council’s Community Planning Partnership Fund, the usual weekly sessions (held at Stonedyke Neighbourhood Centre from January to March) offered access to fun and games for free. The dynamic drummers were never shy of self-expression or short of team spirit!

The great news is it’s 2014: the project is bigger and better than ever, and it hasn’t had to end just yet! With generous support from the National Lottery’s Celebrate Fund, our group leaders and pro percussionists Iain Sandilands and Stuart Semple have been able to invite their protégés aged 8-18 to take on a massive mission – they’ll be channelling their energy and enthusiasm into the buzz surrounding the Commonwealth Games! With just a few additional rehearsals to go, the team are in final preparation for performing alongside the Royal Scottish National Orchestra in ‘Going For Gold’ – a musical celebration of ambition and talent for Culture 2014.

And they’re not just doing it once – they’ll be on stage twice! First of all, at The Glasgow Royal Concert Hall TODAY (Sat 17th May) and then at the Caird Hall, Dundee TOMORROW (Sun 18th May)…huge venues, big gig!!

What’s the plan? Well, CCC presenter and superstar percussionist-turned singer-songwriter Olly Cox (forget Murs!) has composed ‘We Can Fly’, a song (fairly Gary Barlow-esque in character!) designed to inspire young people and celebrate the games. So, for the first time, the scope of the project has been widened to include young people with a talent for singing from existing groups close by: Mega Macs youth club based at St Mark’s Church in Drumchapel; Ignite Theatre Company in Knightswood and the Royal Conservatoire of Scotland’s Junior students.

The drummers from the original Stonedyke group will be dazzling the audience on their djembes (kindly on loan from Art in the Gart) and shekeres (authentic African shakers) using some particularly apt mnemonics to help them remember the rhythms (sporting personalities “[Tom] Da-ley” and Sir “Hoy-Chris-Hoy” feature in the percussion parts of We Can Fly – who would have thought!) and the newly recruited All Drummed Up! singers will star in the first verse; later supported by 13 regional NYCoS choirs and the RSNO Junior Chorus. Hearing them come together on the key lyric, “You can do anything, you just have to try” is sure to be one of those spine-tingling moments.

Going For Gold will provide a unique platform for the young participants to share an unforgettable, once-in-a-lifetime experience, as they perform side-by-side with Scotland’s national orchestra, so don’t miss out on their medal-winning performances this weekend!