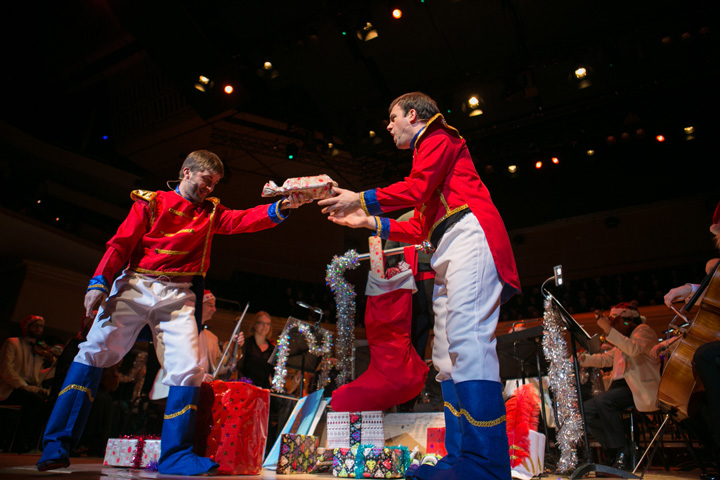 Merry Christmas and thank you to everyone who celebrated with us at this year’s festive concerts! Owen & Olly had a ball as usual, and were delighted to receive this review from Justine Blundell (The Edinburgh Guide) – check it out below:

Owen & Olly’s Christmas Stocking is a cracker of a concert that gives adults the excuse to let their hair down, while pretending it’s all for the kids.

The Royal Scottish National Orchestra are out in force, bedecked in jolly Christmas hats, their music stands adorned with tinsel boas. Behind them, similarly attired, sit members of the National Youth of Scotland Choirs, with representatives from the Falkirk, Edinburgh and Midlothian areas. While the orchestra get into full Christmassy flow with a cheery rendition of Prokofiev’s Troika (Sleigh Ride), Olly and Owen – dressed as Drum Majors – exchange Christmas gifts. Owen’s are amusingly all toy-sized replicas of Olly’s life-sized originals.

Moving swiftly through an atmospheric rendering of Little Drummer Boy, sung by the choir, and a hearty Jingle Bells, accompanied by a fair amount of key-jangling from the audience, we’re into story-time. Olly, dressed in a festive Christmas jumper, sits in a comfy leather armchair to tell the story of Coppélia, read from an oversized book. The story is enacted by talented pupils from the Manor House School of Ballet, who give a beautifully entertaining ten-minute ballet performance.

There’s the now-traditional and somewhat rowdy audience-participation number that is Sam Fonteyn’s Ski Sunday (or Pop Goes Bach for those in the know) and the audience are joyfully on their feet again, after a short interlude from the choir, to bust some moves to Christmas Alphabet.

A highlight is always when our two eponymous heroes do what they do best – namely wheeling out the marimba, xylophone, vibraphone and glockenspiel and let rip with a medley of well-known Christmas tunes. You’ve Got a Friend in Me from Toy Story gives them an excuse to dress as Woody and Buzz Lightyear, and the young ones in the audience are kept very happy when this is followed by the RSNO playing the orchestral suite from Frozen – with lots of wee ones unable to resist prancing about up and down the aisles.

Ending with the rousing Galop from William Tell that has everyone – even the granddads – on their feet and cantering madly, this latest Children’s Classic Concert is a resounding success and sends us all home full of Christmas cheer.

Due to a high number of entries, the winner of the quiz will be announced early in the New Year!

Best wishes from all at CCC!