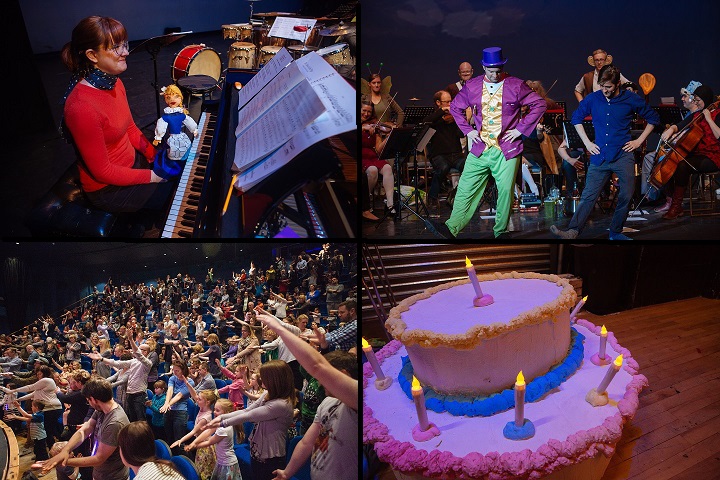 We’re all big Roald Dahl fans at CCC HQ, so we were very excited to see our musicians illustrate their talents and bring fictional fun to life at The Three Little Pigs concert (Macrobert Arts Centre) in Stirling last month! Our mini-orchestra were on a mission to delight families with their Dahl-inspired antics and character costumes – hopefully you’ll agree that they succeeded!

We felt the highlight was Three Little Pigs, Dahl’s Revolting Rhyme, (with brilliant music by Paul Patterson). Olly did a fab job of narrating (his wolf voice was particularly gruff!), Owen made his conducting debut (and played the percussion parts at the same time – how hard can that be, write?) and the acting from our brass players and Company Manager as the pigs, the wolf, and Red Riding Hood was amazing! There was certainly a twist in the tail, but we won’t reveal that here, in case we spoil the surprise for anyone!

The lads were firmly on the same page though, as they took the audience on an astonishing adventure throughout the concert – they got everyone in the party mood right from the beginning with Mambo from West Side Story, before introducing us to the Big Friendly Giants (BFGs) of the orchestra; the contrabassoon, tuba and double bass, in Malcom Arnold’s sprightly Scottish Dance. In contrast, the Minpins (very tiny people!) made an appearance afterwards, as the baby instrument of the orchestra, the piccolo, played a well-known melody from the ballet, Coppélia. Later, the orchestra performed Dance Macabre (Saint-Saëns), showcasing the ‘witch’ of the orchestra, leader Jane Mackenzie, on her spookily de-tuned violin. Next came Tchaikovsky’s Dance of the Sugar Plum Fairy, inspired by Willy Wonka’s sweet tooth (it was also an excuse for Owen & Olly to wear their tutus, as they like to do)!

The intention behind the concert was to celebrate Roald Dahl’s Centenary year, so there was a rendition of happy birthday, complete with a cake fit for the man himself, as well as a massive party game of musical statues. Owen & Olly demonstrated some proper ‘Dad dancing’ – snapping like the Enormous Crocodile, busting some Oompa Loompa moves as well as Miss Trunchbull’s speciality hammer throw, getting everyone up on their feet!

Topping it all off, we had our newly commissioned classical mash-up, arranged by Paul Campbell, of some of our favourite hits (our beloved William Tell is the finale piece), appropriately named, NOW! That’s What CCC Call Classical Music. It certainly seemed to be a crowd pleaser – we had a cracking bit of feedback from a young audience member telling us that this was his favourite bit…

“It was a very hard choice because all of it was mind-boggling, but I think the most flabbergasting part was the finale, because it really tempted me to dance like an insane baboon (but I didn’t).”

Fingers crossed it all goes down well again in Perth! We’re especially pleased to be part of Perth Festival of the Arts this year. Three Little Pigs will be performed on Saturday 21st May, 11am at Perth Concert Hall and we can’t wait for round two!

We owe a big thank you to: