Behind Closed Doors – What really happens at a CCC rehearsal… 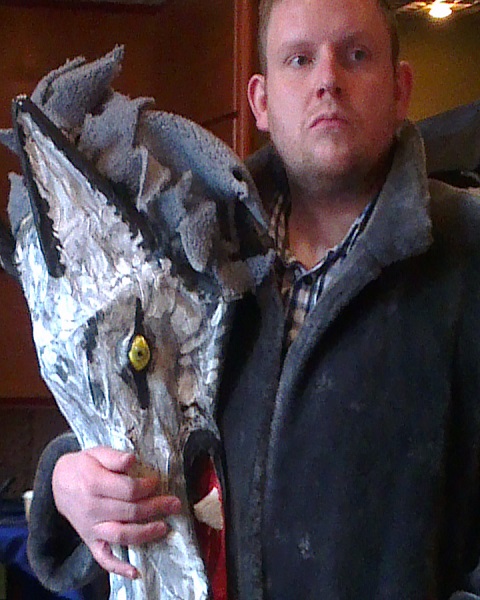 This blog post is brought to you by our newest recruit, Erin, who has kindly offered to share her first impressions of what goes on before a CCC gig.

“The animal I really dig, above all others, is the pig…”

“Ah ha!” I thought “Found them!” A little lost in the backstage areas of the RSNO Centre, the opening refrain of Roald Dahl’s porcine themed Revolting Rhyme saved my bacon. A booming delivery of lines by artistic director Olly had led me to my destination: the rehearsal for the Children’s Classic Concerts’ performance of The Three Little Pigs.

A newcomer to the CCC team (I’ll be starting properly in July, as the Digital Communications Officer) and to their concerts, I wasn’t entirely sure what I’d find on the other side of the door. Some things were expected; my CCC colleagues would be there, as well as artistic directors Owen and Olly, and CCC’s mini 18-piece orchestra (recently formed, featuring long-standing professional musicians, well versed in the classical scene, together with students and recent graduates). But…how did the rhymes and the music interact? What physical role did the crafty characters Olly was describing play in the proceedings? And, most importantly, would I actually get to see Red Riding Hood whip her pistol from her knickers?

Over the next few hours, I witnessed an impressive display from both musicians and the staff, as they worked hard to bring together music and theatrics into a polished, entertaining whole.

The orchestra, already clearly well practiced at the score, worked with the CCC artistic directors to finesse the marriage of words and music, playing with timing and volume. Dahl’s poetry seems to naturally invoke silliness, and was only amped up by Olly’s character accents, as he thoroughly reveled in his dramatic role.

The giggles grew to full-blown laughter in the adjoining room, however, where the three little pigs, the big bad wolf and Ms. Hood were running through their paces, led by theatre director Lissa Lorenzo. To my surprise, I realized our actors were also drawn from the orchestra, namely the brass section, not needed for the Three Little Pigs section of the show. “Here, try this fur coat on for size” said Lissa to Matthew, “I reckon you’ll make a great big bad wolf”, whilst handing out beautifully constructed pig’s head to Arlene and Al.

The trio threw themselves in to their roles with gusto, being incredible sports as they were instructed to strut, run, cower and roar around the stage; CCC Company Manager Pippa also found herself roped in as the one Pig who believed in the power of masonry as a protective material. They may not have known what they were letting themselves in for when they volunteered, but the connection forged by playing music together made them a great team when playing roles together. The only possible hiccup coming when Al was presented with the polka dot drawers he had to wear as the infamous Red Riding Hood: “I’m just not sure they’re my colour…”

An enormous amount was achieved in a brief afternoon, the musical and dramatic parts of the concert falling into place separately, before neatly fitting together; one could see how the final performance would appear, and the sense of excitement in the room was palpable. I began to realize how many different elements – music, costumes, theatrics, audience interaction, a huge dose of enthusiasm and silliness – go into making CCC’s concerts, and how that energy draws in both children and adults alike. Not being able to make the Stirling concert, I’m finally going to be able to experience it fully this Saturday, at the Perth Concert Hall, part of this year’s Perth Festival of the Arts. I can’t wait.