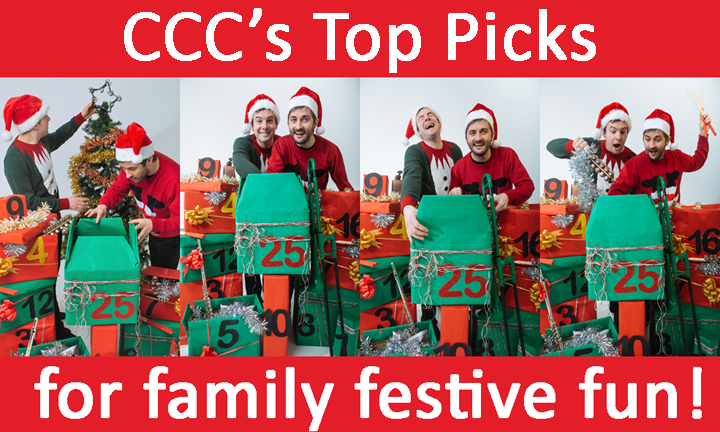 It’s Christmas! The kids are high on a seemingly endless
supply of sugar! You need entertainment, and you need it fast! Fortunately, the
CCC Team are here, with their recommendations on the best in family activities
over Christmas time.

In Edinburgh, the National Museums are taking part in
Edinburgh’s Christmas with Sprogmanay, a 3 day
mini-festival of crafts, storytelling, music and dancing – including a special
lantern procession, and a Hogmanay treasure trail. Pre the big day, there’s Too Many Penguins? by children’s theatre specialists
Frozen Charlotte, on at the Festival Theatre till Christmas Eve (they also have
a book of it, too) whilst Santa can still be visited at the Royal Botanic Gardens.


On the Glasgow front, the big attraction is the Irn-Bru Carnival at the SECC, filled with rides, activities and
amusements till 15 Jan, whilst in the New Year, comedian Lee Kyle takes over
The Stand Comedy Club with a show for kids entitled ‘What Do I Do Now?’.
The Grosvenor are having a live sing-along of Frozen on the morning of
Christmas Eve, whilst slightly further afield Fullarton Fairy Tail is free and open till 5th
January.

Little and big screen wise, there’s rich pickings as ever.
We’re particularly looking forward to the release of A Monster Calls,
starring Edinburgh lad Lewis MacDougall and the voice of Liam Neeson, from
Patrick Ness’ book of the same name. Olivia Colman heads up a stellar cast for
the animated version of We’re Going On A Bear Hunt, premiering
on Channel 4 on Christmas Eve whilst Tom Hardy (yes, *that* Tom Hardy) reads the CBeebies New Year story this year. Don’t say we’re not
good to you.

And last, but not least, a special mention for Social Bite
and ITISON, who have teamed up again to offer you the
chance to buy a Christmas meal for a homeless person, for just £5. They’ve made
a huge difference since they started in 2014, and we
hope they can build on that success for many years to come. Merry Christmas
all!