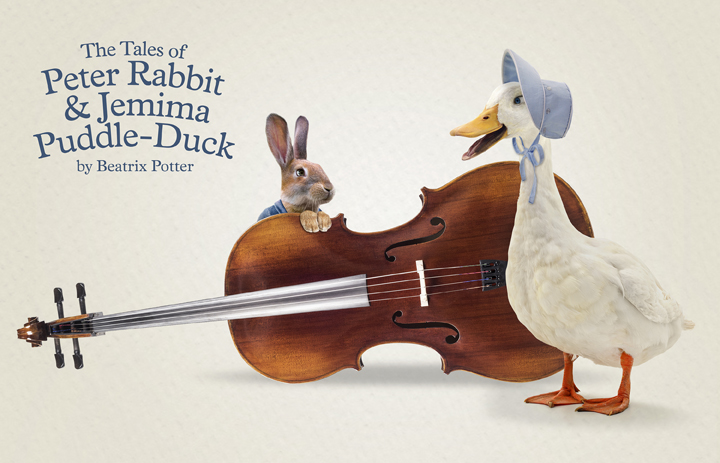 Imagine you’re a young, hungry rabbit, who’s just stumbled across an unattended field of fresh, green lettuces… Well that’s how excited we are to be presenting our first ever Fringe show!

After 23 years of delighting families across Scotland with our antic-packed introductions to live classical music, we’re pitching our tent (quite literally) at the biggest arts festival in the world, to bring you The Tales of Peter Rabbit and Jemima Puddle Duck.

Helen Beatrix Potter (known as Beatrix), was a keen artist, and spent many hours making intricate sketches of animals and plants, revealing a keen eye and fascination for the natural world that would continue throughout her life. Two of Beatrix’s earliest muses were her beloved pet rabbits – her first, Benjamin Bouncer, enjoyed buttered toast and joined the Potter family on holiday in Scotland, where he went for walks on a lead. Benjamin’s successor was Peter Piper, who had a talent for performing tricks, and accompanied his mistress everywhere. Today, more than two million Beatrix Potter books are sold across the world every year – roughly four books a minute!

We’ve teamed up with producer Jimmy Jewell, to bring two of the most popular stories to the Underbelly Circus Hub, this August. Jimmy is a performer, conductor and composer, whose music and productions have appeared on some of the most iconic stages in the world, being made an Associate of the Royal Academy of Music in 2015 for his “outstanding contribution to the UK music industry”. He’s using his expertise to combine Stephen McNeff’s score, the talents of award-winning soprano Michelle Todd, and our hand-picked, brand new, CCC Festival Ensemble – into a not-to-be-missed hour of fun, storytelling and music that will leave your little ones quackin’ for more.

Keep an eye on our Facebook page for more behind-the-scenes information on how we’re bringing these timeless characters to life in Edinburgh – but you can snag tickets already (including bargain rates on the preview dates!). Get hopping!