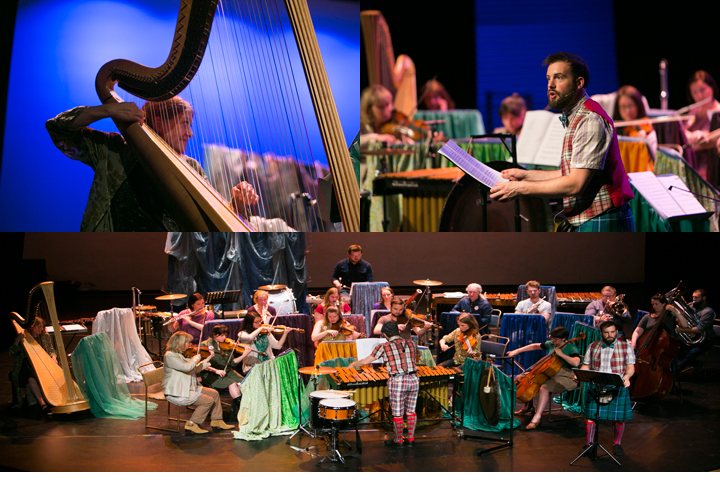 Our Tartan Tales concert delighted audiences in Perth and Stirling last year, with a programme full of Scottish storytelling, family fun and legendary musicians, but let’s delve a little deeper into what you can expect as it tours to its next destination:  Dundee!

Check out the links below, to get a feel for some featured music:

Misterstourworm & the Kelpie’s Gift, Savourna Stevenson
This legendary tale, (with words by Stuart Paterson) has been set to music by the wonderful Savourna Stevenson. Click the link for a five minute animation, narrated by Scots actor, Billy Boyd – it’s well worth a watch! Olly has arranged the piece for our mighty mini orchestra and will step into the spotlight as narrator on the day, with Savourna herself playing the harp on stage – it’s not often you get to see the composer (and arranger) performing their own music live. Talk about a talented bunch!

Hebrides Overture, Mendelssohn
This piece sets the scene of the Scottish Island of Staffa and brilliantly captures the mystery and wonder of Fingal’s Cave; its beauty, isolation and sounds of the rolling sea.

The Campbell’s Are Coming, Leroy Anderson
Although there are no bagpipes in our new arrangement, here’s the well-known tune, recorded in 1899!

As if that wasn’t enough, Owen and Olly will have everyone up dancing the Highland Fling, singing about the mystery of the Loch Ness Monster and listening to momentous music from Scottish films. In short, you’ll visit wild places and fight fearsome beasts, all without leaving your seat at the Caird Hall! The audience will also be invited to choose their own clan from amongst the orchestra: there’s always been some friendly rivalry between instrumental sections and now they’re on the look-out for new recruits – #clanstrings, #clanwind, or #clanbrass. Decide during the concert, and join the musicians after the show for a chance to try playing your favourite instrument!

Hope to see you there, for tickets, please click here!