CCC Presents Peter and the Wolf and other stories… 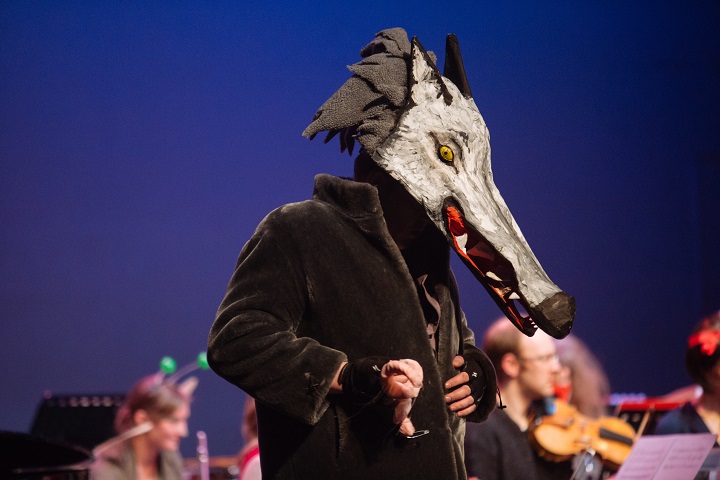 Have you heard? We’re really pleased to be presenting Prokofiev’s masterpiece, Peter and the Wolf in a few weeks’ time! Our 18-piece Essential Orchestra have been invited back to participate at Perth Festival of the Arts at Perth Concert Hall on Saturday 19th May and we’re looking forward as always to returning to the Macrobert Arts Centre in Stirling, on Sunday 20th May.

You might remember Peter and the Wolf from your own childhood; with catchy musical themes and animal characters, it’s easy to see why it has been used time and again as a compelling introduction to instruments of the orchestra, in schools and in concert halls over the years. Harlow Robinson captures the phenomenon beautifully in his 1987 biography of Prokofiev, “Long after his own idyllic childhood, he continued to love children for their unfettered imagination, sense of play and inability to dissimulate. That he never forgot what it meant to be a child, and how children think, is evident in the playful but never condescending music he wrote for them, most of all…‘Peter and the Wolf,’ written when Prokofiev was a boy of forty-five.”

If you’re not familiar with the piece, click here for a lovely recording, with narration by Leonard Bernstein – the story is simple, Peter is a young boy who enjoys taking care of his pets, including a bird, a duck, and a cat. When a wolf lurking in the forest beside his home threatens his animals, Peter organises a hunt, outsmarts the predator and takes him to live at the zoo. Woven into Prokofiev’s score are musical themes to represent each of the characters; the flute becomes the bird, oboe = duck, clarinet = cat, 3 French horns = wolf and the strings express Peter himself.

Members of our Essential Orchestra have been selected not only for their world-class musical talent – they’ve all got the gig because of their ability to interact and have fun with the audience, ideal for bringing characters like Peter and his animal friends to life on stage. The concert is a celebration of musical storytelling, so expect other tales too – we’ll transport you from Peter’s enchanted forest to Romeo and Juliet’s castle stopping off for a spin around Sleeping Beauty’s ballroom.

Owen and Olly are also excited to be in on the act – they’re ready to set the scene and get young imaginations running wild. As always, they’ll need help from the audience along the way, to make sure they don’t lose the plot!

Owen:
“We’re so happy about this new programme and can’t wait to put our own spin on such well-known stories. Bring on the costumes, fun and games and no doubt a bit of drama too!”

Over the decades, the work has been performed by countless orchestras and has attracted an impressive number of celebrity narrators, including Sting, David Bowie, Lenny Henry, Terry Wogan, Patrick Stewart, and Sean Connery.  We’re excited to announce the addition of our very own superstar, Olly Cox (no stranger to spinning a yarn) to the list!

Olly:
“I’m really looking forward to narrating Peter and the Wolf, I loved it when I was a kid. We’ve also got an impressive show-tunes mash-up from arranger Paul Campbell who has done a brilliant job – it’s guaranteed to make the audience smile. Hope to see you there!”

The performance lasts an hour and is followed by an opportunity for the audience to meet some of the musicians and try out their instruments – this could be the start of your own musical adventure!

Fun Facts:
-It took Prokofiev barely more than a fortnight to compose/arrange the music
-Prokofiev composed his first piece at age 5, and his first opera at age 9!
-A movie of Peter and the Wolf, directed by Suzie Templeton in (2006) won an Oscar for best-short film.