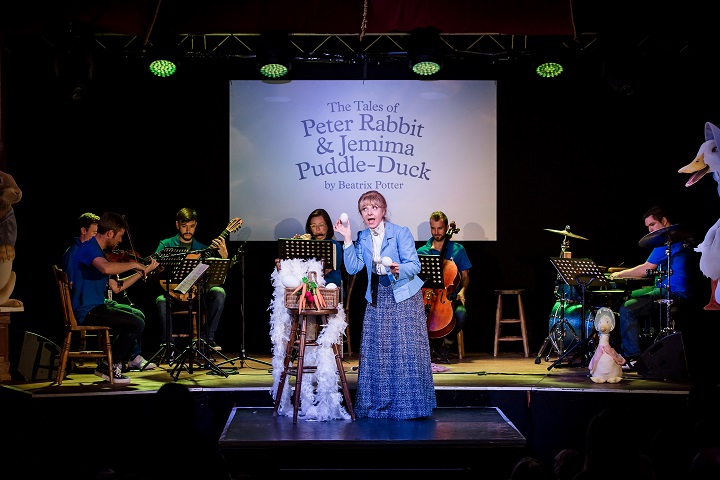 Here’s a look back on the last year, jam-packed with musical mayhem and family fun (FYI, that works out at over 154 concerts and workshops reaching a total audience of 13,954, both publically and behind the scenes, not that we’ve been counting…)!

Beatrix Potter: The Tales of Peter Rabbit and Jemima Puddleduck, August 2017
It all started with our first ever show at the Edinburgh Fringe Festival which ran for 22 performances in August 2017. This appealed to a younger pre-school audience and so it was a lovely way to meet future fans of CCC. It was an all-round quackin’ experience that got the wee one’s imaginations running wild, the adults hopping for joy and it’s one we hope to repeat in future.

Fife Schools Project, September/October 2017
CCC continued its work with Fife’s YMI projects this season, delivering a series of workshops and performances to 600 primary school pupils throughout the region.  Each of the schools spent 6 weeks working with CCC musicians to create their own piece of music from a story they had written themselves and then they came together for a performance of Gypsy Jazz (our latest chamber concert) which you can read about, below.

Melody Quest, Big Music for Minis, 14 October 2017
We really enjoyed collaborating with NYOS Camerata (the showcase, pre-professional chamber ensemble of the National Youth Orchestras of Scotland) to curate a unique show, Melody Quest, for Glasgow Life’s Big Music for Minis Festival. It proved to be an inspirational project – Cressida McKay (flautist) told us prior to the event “As well as having a lot of fun in the meeting I was fascinated to see how much thought has to go into planning a performance. Cath’s and Holly’s passion for the concert is so apparent that I really can’t wait to see our ideas in action — especially when Owen and Olly come on stage wearing ballet tutus for the Sugar Plum Fairy.“

CCC: Access all Areas, Glasgow Royal Concert Hall, 19 October 2017
Encouraging and supporting children and families from more vulnerable backgrounds to come to our performances has been a focus for us over the last few years. Working with the Arts in the City programme at the Social Care Partnership in Glasgow and local charities, young people were invited to an exclusive Access All Areas event at the Glasgow Royal Concert Hall, complete with a backstage tour, percussion workshops and a meet the musicians session ahead of the Ghost Train concert (for which they were given free tickets).

Ghost Train, GRCH & Usher Hall, Edinburgh, 28-29 October 2018
We had great fun sending our phantom trumpet player, Tootle Puff, off on his travels through social media before our Halloween offering with the RSNO and showcased some of the spookiest music from the classical music world. Young singers from the RSNO Junior Chorus joined us and gave a special first performance of ‘The Ghost Train’ – a song written by Scottish composer, Claire McCue. Daniel Rea was our lucky costume competition winner (he came as Lord Garmadon from The LEGO Ninjago Movie!) and enjoyed a trolley dash courtesy of sponsors, A1 Toys.

4 Man Band, Paisley Christmas Lights, 18 November 2017
CCC values the importance of working in local communities and we were happy to support Paisley’s bid for City of Culture 2021 – our 4 Man Band saw four percussionists performing a variety of popular tunes (one of the highlights being a video games medley featuring appearances from Mario and Luigi).  Our musicians played outdoors with live screens throughout the city and stopped busy Christmas shoppers in their tracks with their rendition of Philip Glass’ Mad Rush.

Tinseltown, 16-17 December 2018
We brought a touch of Hollywood sparkle to the Glasgow Royal Concert Hall and the Usher Hall with hits from favourite festive films! Owen and Olly together with the tinsel-topped talent of the RSNO (conducted by jolly Holly Mathieson) presented the ultimate soundtrack to the season, including music from Home Alone, The Grinch, Elf and Frozen! Everyone left firmly in the festive spirit after a sighting of the biggest Christmas celebrity of all and our audiences loved taking their very own Christmas #sELFies in the foyer!

Gypsy Jazz Concert Tour (Glasgow, Peebles and Banchory), 23-25 February 2018
After developing a new programme as part of a 2 day residency at ‘The Big Shed’, Perthshire in September, Gypsy Jazz band Rose Room, featuring the phenomenally talented Seonaid Aitken on fiddle/vocals teamed up with Owen to present a series of concerts that had families up dancing and clapping along every beat of the way. Audiences also loved being able to jam along with the pros in workshops before seeing and hearing their skills on stage. Rose Room and Seonaid have since gone on to win Best Band and Best Vocalist at the Scottish Jazz Awards 2018, yay!

The pesky Beast from the East scuppered things a bit as we were due to give a performance of Tartan Tales in Dundee on 3 March. Sadly it wasn’t to be, but we more than made up for it later with an additional Gypsy Jazz concert which went down a storm!

Weekend with Colin Currie, Platform, Glasgow, 21-22 April 2018
For a new initiative for the 17-18 Season we wanted to provide ‘the next step’ for our audience.  As our target audience is 4 – 12 year olds, we wanted to explore a way CCC could bridge the gap between our concerts and a standard classical orchestra.  To do this, we arranged for Colin Currie and Owen to run workshops for a group of young percussionists (15 – 18) looking at contemporary pieces such as Clapping Music by Steve Reich, creating new inventions using old bike parts and tackling Varèse’s iconic Ionisation for percussion ensemble; all of which was very well-received as part of a showcase concert for parents and the public at Platform.

‘Music Education Matters’ Conference, Glasgow, 18 May 2018
Music Education Matters is an annual conference held in Glasgow by our friends at Enterprise Music Scotland.  For the 2018 conference Owen ran a workshop for the delegates on how body percussion can be used to create an easy group piece without the need for instruments or sheet music. It turned out to be one of the highlights of the day!

Peter and the Wolf (and other stories)
Perth Concert Hall & Macrobert Arts Centre, Stirling, 19 – 20 May 2018
Our 18-piece Essential Orchestra took on Prokofiev’s best-loved symphonic fairy tale, Peter and the Wolf, embracing the animal characters and costumes to the max – squeals of horror/delight were heard in the audience when the wolf spat out duck feathers (sorry, spoilers)! Owen and Olly put their own spin on stories like Romeo and Juliet and Sleeping Beauty too. One young patron told us the best bit was “the amazing marimba finale [as] Owen and Olly made [her] favourite songs from the shows [musicals] even more special!” Audiences were invited to meet some of the musicians afterwards and given an opportunity to try out their instruments, which, as usual, drew large crowds of enthusiastic participants.

Soundcycle
CCC has been lucky to receive funding for performances at City Halls as part of Festival 2018 (which will see a buzz of cultural activity across Glasgow, running alongside the European Championships) this August.  As you may have guessed, we’ve chosen to celebrate cycling! In the lead-up to our sporting-themed extravaganza on Friday 10 August, we’ve been running a number of community workshops with a focus on how bikes can be used to create music and we’ve teamed up with several community bike stations, schools and learn-to-ride charities  to explore different sounds! Composer Tom Harrold has written us a new piece called ‘Unchained’ using recordings captured in these workshops and it’ll be performed live on percussion (and actual bike parts!) by world-champion percussionist, Colin Currie.

We Can Fly
A very exciting project close to our hearts began in February 2018 and will continue as our new season begins (more on this to come)! It involves 11 Additional Support Needs schools across Edinburgh and Glasgow, focussing on supporting the transition between primary and secondary and finishes in style at our Broomstick Ride Halloween concerts.