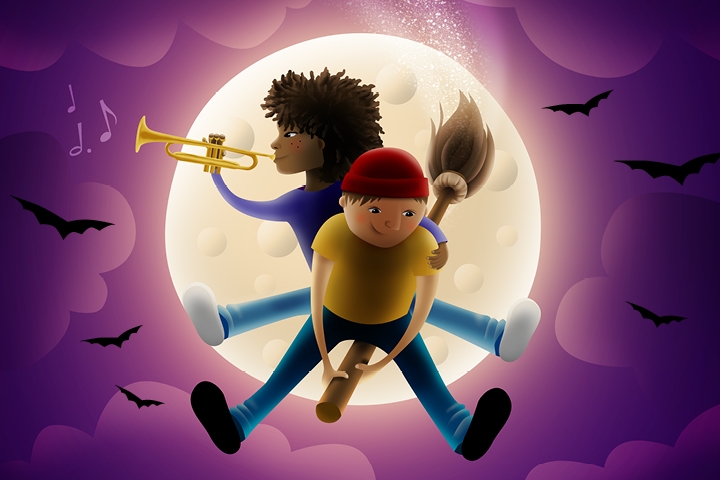 Autumn is arriving, which can only mean one thing – the launch of CCC’s season 2018-19!

We’re so happy to announce the details of our main concerts in Glasgow and Edinburgh for all the family (we’re also giving you a heads up about what we’ve got planned for next Spring – skip to the end to see dates you’ll need for your diary)!

We’ll be taking off into a mysterious musical world over the Halloween weekend, flying through some CCC classics and family favourites from Harry Potter, Wicked and Wizard of Oz (so grab your Nimbus 2000, or your Firebolt if you upgraded)!

This concert is particularly special as it rounds off a project close to our hearts in style. At the moment, we’re working with young pupils who have additional support needs on a version of ‘We Can Fly’ – an inspirational song written by Olly. They’ll have an opportunity to perform this live on stage with the Royal Scottish National Orchestra, accompanied by mentors from Drake Music Scotland(DMS) and NYCOS Regional Choirs. We’re also going high-tech with a large screen above the orchestra to ensure that every participant from the project has their moment to shine – we’re getting goosebumps already just thinking about it. There will be an opportunity to come and try some of the inclusive music technology used on stage in the foyer before the concert and a chance to chat to the experts at DMS – what’s a Soundbeam, you ask? Come and find out! Plus, as always at CCC, we’ve got some tricks and treats up our sleeves, with some excellent gags and silliness!

Don’t miss the chance to win a TROLLEY DASH at A1 Toys, just get creative and wear a spooky costume to enter our legendary competition! For the lucky winner, Christmas will definitely come early…

CCC’s very own muppet, Owen Gunnell (sorry Owen!) is ready to lead us through Charles Dickens’ iconic Christmas story with plenty of his trademark charisma – ‘tis the season to be jolly after all!  He’s looking forward to sharing the stage for the first time with actors from the Royal Conservatoire of Scotland, as well as dancers from Manor School of Ballet (as is CCC tradition), combining some cracking theatrics into the mix. That festive feeling will well and truly kick-in after a sing-along or two (no bah-humbugs allowed)!

What else is happening?

We’re excited to be hitting the road THIS WEEKEND for our first ever visit to the stunning Isle of Skye. Our mission? To celebrate National Chamber Music Day along with Enterprise Music Scotland.  We’ll be mixing up the sounds of strings and percussion in an hour-long interactive concert featuring the world-class Maxwell Quartet (fresh from victory at the 9th Trondheim International Chamber Music Competition, so the perfect partners in crime)! There are some fabulous events happening all over the country that day (Saturday 15 September), so if you’re not within easy reach of Skye, check what’s on near you…but think about coming to Skye! On Sunday 16 September, Fiddlesticks finds its way to Fort William (Lochaber High School) which we’re equally excited about as we’ve never been before!

Following a hugely popular tour last Spring, our Gypsy Jazz concert heads further North to the OneTouch Theatre at Eden Court in Inverness (can you believe, it’s also our first ever time there)! Owen is channelling his jazz vibes and teaming up once again with award-winning singer and fiddler, Seonaid Aitken, along with her band – Rose Room, one of Scotland’s leading jazz string ensembles, for an inspirational hour-long show.

With tap dancing like you’ve never seen before, skilled performances of classics like Minnie the Moocher, and some little known gems, this exciting programme will get the whole family up dancing in the aisles, involving the audience every beat of the way!

PETER AND THE WOLF

Our fab Essential Orchestra musicians are back together to recreate Peter and his animal friends on stage – will they outsmart the wolf lurking in the forest and get young imaginations running wild? This concert is a celebration of musical storytelling, so expect other tales too – we’ll transport you from Peter’s enchanted forest to Romeo and Juliet’s castle stopping off for a spin around Sleeping Beauty’s ballroom. Check out our teaser film, here!

There will be an opportunity to meet some of the musicians afterwards and try out their instruments – this could be the start of your own musical adventure!

We’re still buzzing after our Summer of all things ‘Soundcycle’ – with the European Championships in Glasgow this August, we took it upon ourselves to create the ultimate sporting-themed concert to celebrate. It was just so successful that we simply have to let the people of Stirling experience it!

Cheer on different sections of the orchestra as they go for gold in a musical relay race, witness a synchronised swimming routine that’s frankly a hilarious stroke of genius and show off your freestyle moves in a game of musical statues – a CCC concert isn’t a spectator sport, it takes teamwork from the audience! As if that wasn’t enough, world famous percussionist Colin Currie is back with us to perform the newly commissioned, ‘Unchained’. It features bike parts and was written by Glasgow-born composer/CCC super fan, Tom Harrold – let’s just say, when music meets cycling, it sounds wheelie good!

So, to sum up, there’s lots to get excited about (plus there’s another project happening in Glasgow that we’ll reveal later), which is pretty cool given that 2018 is the Year of Young People – let’s hope that at these concerts we can inspire the next generation of musicians, composers and arts promoters.

At a glance – get out your diaries!

We’re looking forward to working with: