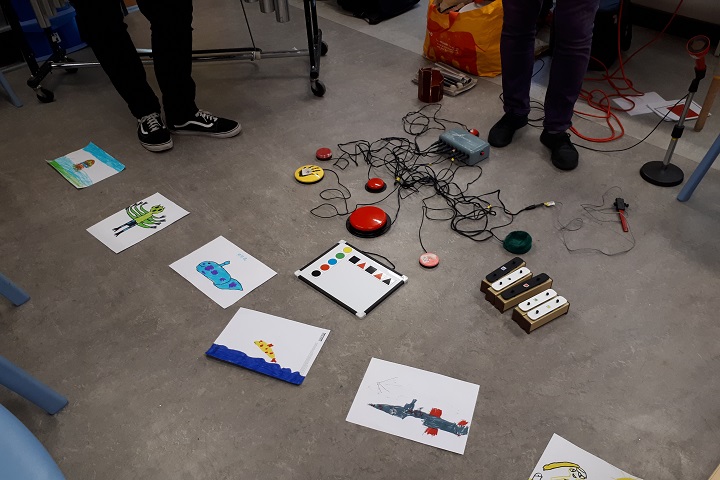 We’re really happy to be working in partnership with Drake Music Scotland on one of our most ambitious projects yet, tailored for children with additional support needs who have recently made the move from Primary to Secondary school.  Changing schools is a major life event, and can be a pretty daunting one at that (the youngest member of the CCC team can still remember ?) so in delivering this project, we’ve been aiming to do as much as we can to support this important transition. Workshop sessions have provided the opportunity for creative composition, team work and hopefully, a lot of fun! It’s not just the young people who have been taking on something new – the collaboration with DMS means that all of us at CCC are learning loads, too…

Percussionist, Colin Hyson (a member of CCC’s education team) joined forces with DMS Associate Musicians Ali Gillies (in Edinburgh) and Matilda Brown (in Glasgow) back in February while the children were in their final year of Primary. They made use of percussion instruments and inclusive music technology in every session, such as iPads with the ThumbJam App. plus Soundbeams and switches that trigger different notes and effects. The technology is completely adaptable to suit individual needs, empowering each participant to produce sounds, and take control of them, no matter their disability.

Through Drake, Colin was also introduced to the Figurenotes notation system which assigns colours and shapes to different notes, allowing people to ‘play what they see’. Pupils were invited to make choices, such as which colours (notes) to select and to decide on the sequence – building their own melodies in the process.

The P7 classes were given the chance to perform their new music to the rest of the school, as part of a concert delivered by Owen and Olly (with the usual dressing up and messing around)! Unfortunately much of this activity was due to take place just as the ‘Beast from the East’ hit (turns out, it was a real Pest in the West), so several workshops and concerts were rescheduled.

Despite the disruption, the workshops were a success.  Colin told us “[he] had a great experience working with both Ali and Matilda and learned a lot from them. We were always able to chat about the direction things were going in and the pupils achieved some great pieces of music that teachers and parents were really impressed by.”

Following the spectacular Summer holidays, we’re now into the second phase of the project (in the Secondary schools) and this time, it’s Olly teaming up with the Drake musicians, to work on a re-arrangement of his inspirational song, ‘We Can Fly’

Some of you might remember the original version from our Going for Gold concerts celebrating the Commonwealth Games in 2014…there wasn’t a dry eye in the house (you can re-live it here)! Performances of the re-arranged We Can Fly will feature in our upcoming Broomstick Ride Halloween concerts with the RSNO and will be a fitting tribute to Olly, as he leaves CCC after 10 years as Artistic Director alongside Owen, for a new life across the pond, where he’ll be pursuing his career as a composer.

His lyrics are particularly powerful and relevant in light of this big move:

Olly feels that the message, ‘you can do anything, you just have to try’ is important, and a universal one and that this project really grasps the essence of this theme. Each pupil we’ve worked with has been captured on camera by our lovely film-maker, Tom Swift, as they’ve played their parts and these visuals and audio will be integrated into the We Can Fly piece via a large screen above the orchestra.

A few pupils from each city have also been invited to perform live on stage, which will hopefully be a fantastic and memorable experience for them, as they make music alongside the mighty RSNO and the powerful voices of NYCOS Regional Choirs.

We are truly thrilled that Olly’s last project with us is pushing the boundaries – we’ve not taken on anything quite like it before, and these truly inspirational children have proven to all of us involved that anything is possible.

We owe a huge thank you to Olly for his commitment to CCC over the years and wish him every happiness and success in the future!

There are many others that we need to say thank you to, without whom our We Can Fly project couldn’t have been realised: