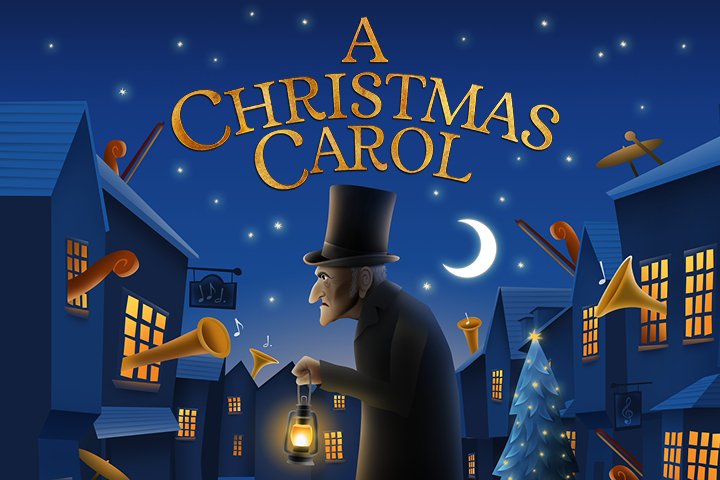 Not long to go now, just a few more sleeps until the big day! Whilst rushing around to get ready, we’ve been reflecting on CCC’s Xmas celebration, 2018 – what a show!  Earlier this month, A Chistmas Carol was attended by 4,377 in total in Glasgow and Edinburgh, which got us firmly into the Christmas spirit!

It was Owen’s first major concert without his partner in crime, Olly, and he rose to the occasion amazingly, even learning a script for the first time (yes, you might be surprised to learn that for the last decade there’s been a fair amount of off-the-cuff presenting going on)! This production, however, required a more theatrical approach to bring Dickens’ classic plot to life. The mighty Royal Scottish National Orchestra set each scene with carefully chosen music to capture the essence of the story.  Owen kicked-off proceedings with an ill-fated festive shopping trip, set to Troika by Prokofiev and found himself longing for a Christmas, ‘the way it used to be’.

Perhaps he should have been more careful about what he wished for! After an encounter with surly Scrooge and kind-hearted Bob Cratchit, played by students at the Royal Conservatoire of Scotland (Sam Stopford and Angus Taylor respectively), Owen knew he was in for a Christmas concert with a difference…

• Scrooge’s performance attracting lots of booing from the audience.
• Laughs when ‘not so Tiny Tim’ was introduced (played by Aiden Lyons, from the RCS Junior Conservatoire)…Owen was left wondering how he’d been cast given the very slight height difference!

The ghosts in the story, portrayed beautifully by dancers from Manor School of Ballet with some chilling choreography and powerful music.

Owen entering the stage mid-way through, all ‘wrapped up’ to provide light relief as, the spirit of Christmas present (see what we did there?)

The choir of musical theatre students at the RCS Junior Conservatoire – they sounded sensational. We also loved the solo at the beginning of our Christmas Party Pop medley – Meghan gave Mariah a run for her money!

Scrooge realising Christmas (especially with CCC!) can be fun. There was a snowball fight, and everyone got up to sing and dance along to the 12 Tunes of Christmas! If you want to remember the order so you can recreate it at home, look no further:

Young audience members who took part in our legendary quiz had some lovely things to say about their best bits:

“I loved the cheery atmosphere in the crowd. The Christmas spirit shone right through the performance into the audience. It was great! I also loved how the concert was a play at the same time.” Benni, age 13
“Too hard to pick a favourite part!” Rory, age 5
“My favourite was Owen playing the typewriter. It was a bit funny and catchy. Also it was nice how he helped Bob Cratchit”. Caelen, age 10

Thanks so much to everyone who has supported us this year!

What’s coming next, you ask? We’re hitting the road in the Spring with a tour of ensemble concerts, following their hugely popular reception last season:

Owen will be channelling his jazz vibes in Inverness and teaming up once again with award-winning singer and fiddler, Seonaid Aitken, along with her band – Rose Room, one of Scotland’s leading jazz string ensembles. With tap dancing like you’ve never seen before, skilled performances of classics like Minnie the Moocher, and some little-known gems, this exciting programme will get the whole family up dancing in the aisles, involving the audience every beat of the way!

Peter and the Wolf:

Our fab Essential Orchestra musicians are back together to recreate Peter and his animal friends on stage – will they outsmart the wolf lurking in the woods and get young imaginations running wild? We’re so excited to be returning to Dundee and to take the CCC experience into the newly renovated Music Hall in Aberdeen! This concert is a celebration of musical storytelling, so expect other tales too – we’ll transport you from Peter’s enchanted forest to Romeo and Juliet’s castle stopping off for a spin around Sleeping Beauty’s ballroom. You can catch a taster film of the action here!

With the European Championships in Glasgow this August, we took it upon ourselves to create the ultimate sporting-themed concert to celebrate. It was just so successful that we simply have to let the people of Edinburgh and Stirling experience it!

Cheer on different sections of the orchestra as they go for gold in a musical relay race, witness a synchronised swimming routine that’s a stroke of genius and show off your freestyle moves in a game of musical statues – a CCC concert isn’t a spectator sport, it takes teamwork from the audience! As if that wasn’t enough, world famous percussionist Colin Currie is back with us to perform the newly commissioned, Unchained. It features bike parts and was written by Glasgow-born composer/CCC super fan, Tom Harrold – let’s just say, when music meets cycling, it sounds wheelie good!

Thanks for reading! Make sure you’re signed up to our mailing list for the latest info – just click here!
Plus, to keep up with Olly’s adventures across the pond, take a look at his new website!