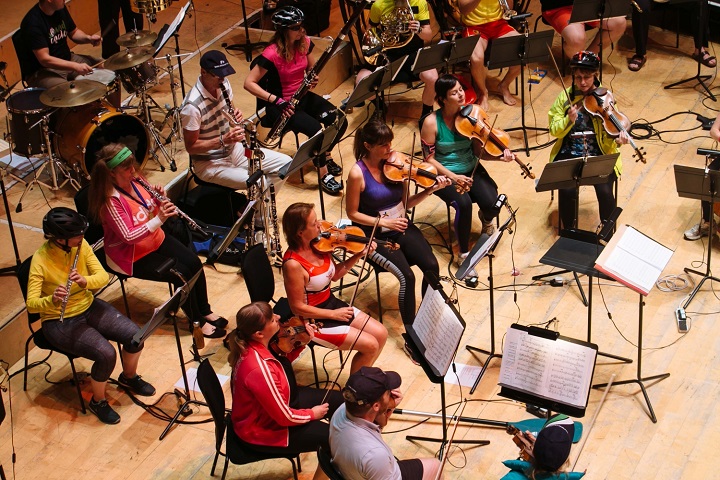 We’re gearing up for Soundcycle – a concert that celebrates sport in all its glory (with a focus on cycling)! Plans are now in full swing and we can’t wait for everything to come together again next month. Fingers crossed, it’ll be just like riding a bike…

What can you expect? Well, a varied programme that features much-loved sporting themes and explores some top-notch classical pieces, presented with a bit of a twist and a lot of imagination – you won’t want to miss the breath-taking brass section of our Essential Orchestra take on a synchronised swimming routine that’s quite frankly, a stroke of genius! There will of course be the chance to feast your eyes on some crazy costumes and there’ll be opportunities to join in with some fun and games – a mass audience baton relay race being one of them (a CCC concert isn’t a spectator sport, after all).

But, one of the highlights and something we wanted to feature in this news post, is undoubtedly ‘Unchained’ for solo percussion, bike parts, electronics and orchestra, by young Scottish composer, Tom Harrold (pictured, below). Not only is his piece exciting, fresh and innovative, it’s also the result of a meaningful collaboration. It was on an episode of BBC Proms Extra back in 2016 that Tom credited CCC as being among his first inspirational and memorable experiences of music – “[we] planted a seed with him” and so naturally, we were thrilled to be able to commission this new work and showcase his talent. We caught up with him recently and he’s very kindly written about the process, to give our fans some insider info…

“I was first approached by Children’s Classic Concerts to write a new concerto for the amazing percussionist, Colin Currie, back in 2017. I was incredibly excited to be asked to write a piece for such a fantastic, world-class musician. As the new piece of music was first going to be performed as part of Glasgow 2018 (the massive sporting event that took place last year), CCC put an exciting spin on the commission. This spin was to write for Colin, but also to integrate in some way a sporting element. It was decided that we would use bikes as part of the piece.

But how do you use bikes in a piece of music, I hear you ask! Well, there are a few different things that we did to give me ideas and help my imagination with this. We spent a lot of time at some fantastic Glasgow schools, where Colin (not Currie!) and Jack from CCC brought some tremendous parts of bikes: bells, wheels, spokes, frames, helmets, horns…anything from a bike, we brought to these schools. We then had some brilliant sessions with these young people experimenting with these broken bike parts. Turns out you can hit, scrape, toot, bash, thump and hammer bike parts – who knew?! I was able to record these incredible sounds, and then move them into an electronic backing track (more on that in a minute).

These sessions gave me an incredible insight into how a bike can be used as an instrument, so we quickly decided that in the final piece, I was going to write that we would include ANOTHER percussionist playing on these broken bike parts, on an incredible, custom-made, never-before-seen instrument.

Also in these sessions, I was recording all the noises that these broken bikes made, so that later on I could put them all together into this electronic “soundscape” that you’ll hear through the speakers during the piece. I use a lot of the bell sounds in this electronic music which you should be able to hear. I also had fantastic help from a brilliant group of young percussionists who played a broken-bike samba band that you’ll hear through the speakers too.

So, now I had all the bike noises, broken bike super-instrument, Colin Currie to play solo, and the brilliant CCC Orchestra – I had to write the piece! The title came first: Unchained, which ties in with these crazy bike sounds, and the fact that the piece is a little bit mad in some places too! Unchained is a short, intense work that sets the solo percussion and bike parts on a frantic journey to escape from the rest of the ensemble – they are continuously interrupted by the ensemble’s angry, aggressive music, from which the two soloists never quite seem to be able to escape. There is something evil lurking within…”

A big thank you to Tom for taking the time to share this (you can hear a taste of Unchained below)! Owen is also looking forward to the performances – “Playing new music is always exciting. Plus, playing it with Colin (it’s great working with a friend) and having Tom Harrold himself conduct it, will make these gigs really special events…”