Counting down to the launch of Weird Science! 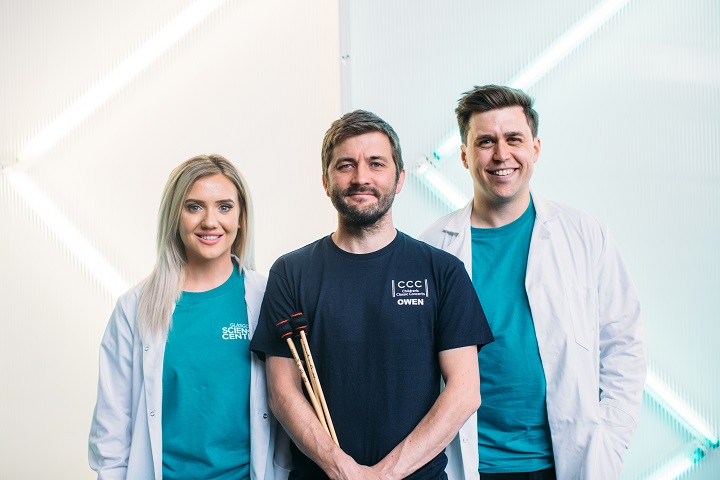 Chemistry, astronomy, music, and even time-travel are set to collide THIS WEEKEND, as we take our audiences on a whirlwind tour around our unique science lab with a few surprises along the way…

Owen is joining forces with the Royal Scottish National Orchestra, RSNO Junior Chorus and guest presenters from Glasgow Science Centre, who have lots of tricks up their sleeves – with music from Back to the Future, Jurassic Park and the hilarious Elements Song, plus live science experiments throughout – we really are starting our 25th Anniversary with a bang!

Owen says: “The connection between music and science has always fascinated me and when would there be a better excuse to play with fire in front of a live orchestra! So many great scientists have also been musicians – in fact, Borodin, one of the composers featured in the concert was a chemist. I also get to create my own experiment using a range of percussion with our new science-themed medley that finishes the concert – it is going to be explosive!”

Celine (GSC) says: “Being a music graduate who moved into a science career means I will literally be in my element (pardon the pun) being part of Weird Science. So excited to have the opportunity to combine my two passions.”

And Ross (GSC) says: “I’m frankly beside myself that I’m going to do what I love best alongside a full-scale orchestra! We’re used to plenty of bangs, fizzes, whooshes day to day doing our various science demonstrations so it’ll make an interesting change to hear them coming from a percussion section as well as us (or Owen of course)!”

With the help of his friends, Owen gets to revisit some of his favourite subjects from his school days using his creative talents, proving at this crucial time for music education, that the sciences and the arts must both exist equally to support the other. Our Weird Science concept is a winning formula for families this Halloween…(in theory)!

Don’t forget you’ll have the chance to try out some of your own science experiments in the foyer before and after the concerts (GSC are bringing their On Tour team to the venues) and dressing up is encouraged as always! There’s a lovely treat in store for the winner of our costume competition – a family day pass to Glasgow Science Centre. Get involved from 2pm onwards this Saturday (26 October) at The Glasgow Royal Concert Hall and Sunday (27 October) at The Usher Hall, Edinburgh.

A big thank you to our sponsors, La Bonne Auberge