Our 25th Anniversary Year Started with a Bang! 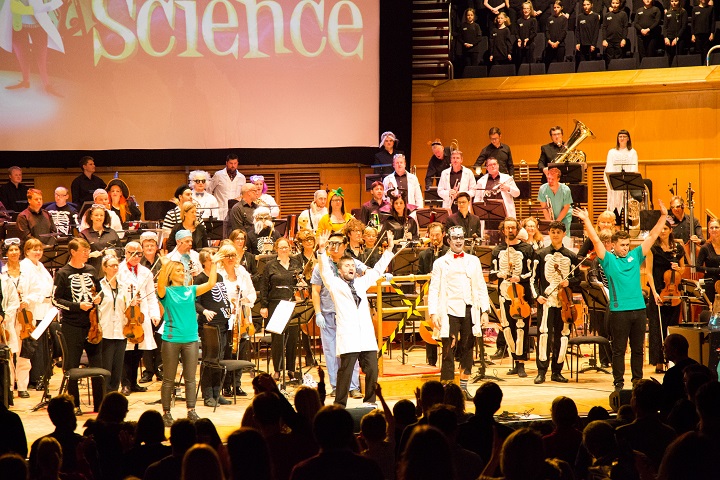 We’re still buzzing from the incredibly positive reaction to our Weird Science concerts – they were a blast!!
A huge thank you to:

Celine and Ross from Glasgow Science Centre for being fab guest presenters and helping Owen discover a few new tricks (Owen, you know how much we love you, you were on fire!)
Professor Phil for having awesome chemistry with the audience
The wonderful Royal Scottish National Orchestra and RSNO Junior Chorus, for their brilliant performances
The amazing animators from the University of the West of Scotland for bringing the dino drawings to life
The technical teams behind the scenes at both venues for putting on such a memorable show
La Bonne Auberge for their continued sponsorship
And of course, our lovely audiences!

It was also rather nice to receive this **** review from The Herald – the icing on our Periodic Table-themed birthday cake!

WITH the enthusiastic support of the Royal Scottish National Orchestra and Assistant Conductor Junping Qian, Children’s Classic Concerts has rescued the celebration of Halloween from dubious pagan practices and inappropriately under-clad adults, and placed it safely in the hands of a pompous self-styled scientist, whose real skill is as a virtuoso percussionist.

Owen Gunnell’s character for his presentation of these gigs is of a man who is not half as clever as he thinks he is, and that persona was given plenty of help here. He was run ragged keeping track of all the elements in what was CCC’s most extravagant production yet. Not that it seemed to bother the target audience of primary-age youngsters who filled much of the capacity house, but there were times when the amount of stuff going on was dizzying.

With a narrative that saw our hero travel into space and through time, the music included John Adams (from the Doctor Atomic Symphony) and Savourna Stevenson’s gorgeous Waiting for the Silver Sailed Moon, sung by the RSNO Junior Chorus, as well as more familiar selections like Also sprach Zarathustra, Holst’s Jupiter (again with the choir), and movie music from Back to the Future and Jurassic Park. With the conductor in scrubs and latex gloves, the orchestral costume prizes went to the percussion section’s pumpkin, and first bass Margarida Castro’s full-face Joker make-up.

The supporting attractions on this bill, however, was a very long list indeed. The involvement of Glasgow Science Centre, in the specific persons of Celine Smith and Ross Brackenridge, brought some genuine science on to the platform, even if the experiments did not always go entirely as predicted (a valuable lesson in itself). Baritone Phil Gault added a breakneck explanation of the Periodic Table, as versified by Tom Lehrer, and the projection screen above the band was in constant motion, most memorably when children’s dinosaur drawings were brought to life by animation students from the University of the West of Scotland.

It was lots of fun as always to read comments from our young audience about their favourite bits, too:

“All of it! Because it was the perfect combination of music, facts and fun!”
“The Elements song followed by Owen turning Phil into Frankenstein – the music and visuals went together perfectly – it was all exciting.”
“Indoor lightning was incredible. MORE SCIENCE!!”
“It was very humorous! And the music was great ?”
“The chemistry song was amazing. I didn’t know people could sing that fast.”
“I enjoyed imagining that I was flying to Jupiter. It was so fun and I saw an unearthly creature! Thank you!”
“All of it – I don’t have a why.”