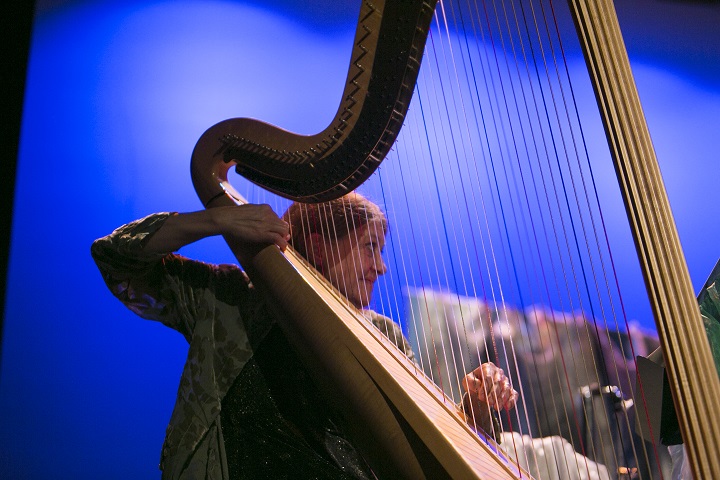 Picking up where we left off, it’s now Savourna’s turn to tell us a bit about herself ahead of Tartan Tales this weekend. We’re looking forward to performing her music and having her on stage, too!

What do you love most about music?

“The thing I love most about music is that it transports you to another world in your imagination.”

What’s your favourite thing about Misterstourworm?

“When the orchestra becomes the sea serpent, Misterstourworm. I also like playing the harp in the fairy queen music.”

What’s been the biggest challenge in bringing Misterstourworm to life?

“Working for CCC is the most fun a musician could have.  Owen Gunnell is one of my favourite musicians. CCC always work with the best musicians which is great for me as a composer.”

How long have you played the harp/clàrsach?

If you were stuck on a desert Island (or a sandy Scottish beach in the Outer Hebrides), what would you want to listen to?

“Well, if I were stuck on a Hebridean beach, hopefully it would be in Summer! I’d want to listen to George Gershwin’s American in Paris. Gershwin is one of my favourite composers and American in Paris has all the sounds of a busy Parisian street which would transport me to a different place. It is also a very happy piece.”

Tell us your favourite thing about living in Scotland (and the best places you’ve visited)?

“The two best things about Scotland are the people and the landscape. My favourite Scottish beauty spots are Ardnamurchan and Iona.”

Do you believe in Nessie?

“OF COURSE I BELIEVE IN NESSIE!…NEXT!”

How do you like to start with a new piece and what’s it like to hear your music played back once it’s finished?

“I like to start a new piece with some sort of story line or a piece of music to inspire me or some words. Hearing my music being played for the first time is…like Christmas morning!”

Do you have any advice for future composers?

“Quite simply, make your music speak from your heart to your audience.”

We’d like to thank both Savourna and James for taking the time to chat to us! As if that wasn’t enough to make this concert epic, Owen will have everyone dancing the Highland Fling, singing about the mystery of the Loch Ness Monster and listening to momentous music from Scottish films. To sum it up, you’ll visit wild places and fight fearsome beasts, all without leaving the concert hall!

The audience will also be invited to choose their own orchestral clan – there’s always been some friendly rivalry between instrumental sections and now they’re on the look-out for new recruits – so will you band with clanstrings, clanwind, clanbrass, or clandrums? Decide during the concert and join the musicians after the show for a chance to try playing your favourite instruments!

Hopefully see you soon and thanks for reading.