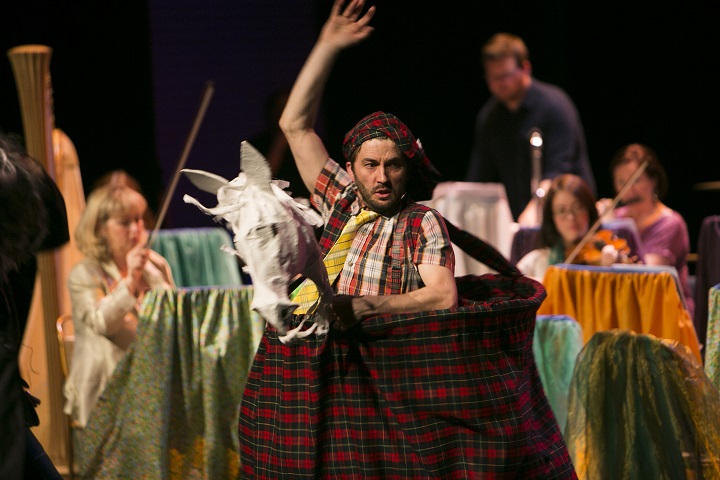 For those of you keen to know more about the Tam O’ Shanter story featured in The Haunted Concert Hall, look no further! Here’s Owen in character during a previous performance (our Tartan Tales concert) to help set the scene:

Tam O’ Shanter, a poem by Robert Burns, describes the story of a farmer, called Tam, who spends a lot of time with his friends in the pub. After one such late-night party, Tam sets off home on his horse, Meg, when a storm starts brewing. On his way, he sees the local haunted church, the Kirk Alloway, lit up with witches and warlocks dancing and the Devil playing the bagpipes. He stops, just at the edge of the light, watching in amazement. The witches are dancing as the music builds and Tam, now scared and confused, shouts at them. Immediately, the lights go out, the music and dancing stops and many of the creatures lunge after Tam, with the witches leading. Tam spurs Meg to turn and flee towards the River Doon in an effort to escape. The creatures make chase and the witches come so close to catching Tam and Meg that they pull Meg’s tail off (poor horse!) just as they reach the Brig o’ Doon and cross to safety.

Quite a night full of mishaps for Tam, but also lots of powerful imagery, perfect for the Halloween theme!

We hope you enjoyed the Royal Scottish National Orchestra’s performance of Malcolm Arnold’s music in the film – did you hear what was happening to poor Tam? Remember you can watch the film back as many times as you like before the end of November.

Thanks for reading!
The CCC Team.