This Iconic Christmas Poem is like Music to our Ears 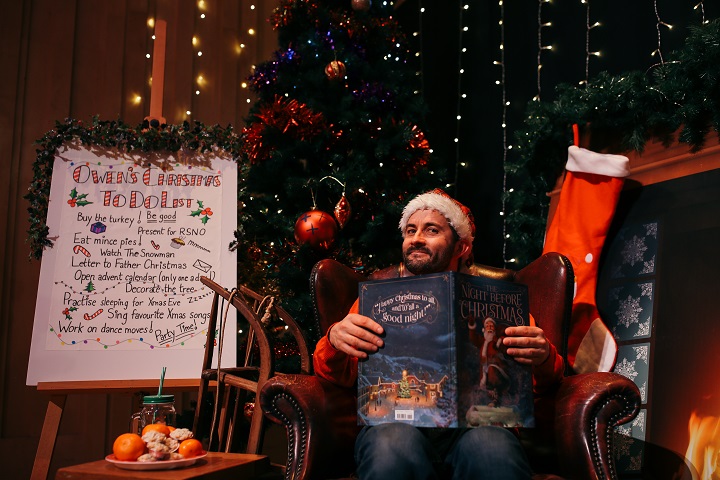 We thought we’d give a wee insight into one of our favourite pieces of festive poetry, featured in our Christmas concert of the same name, with the Royal Scottish National Orchestra, available to view now on a screen near you!

The poem “The Night Before Christmas” or “A Visit from St. Nicholas” is widely thought to have been written in 1823 by Clement Clarke Moore (1779 – 1863). It’s more of a treasured tradition in the US, but it’s certainly appreciated in the UK too and to a certain extent the imagery of this poem is believed to have played a part in bringing about the visual portrayal of Santa and his gift-giving ways, that we know and love today – it’s hard to imagine anything other than a red cloaked, white-bearded soul with a packed sleigh of toys guided by trusty reindeer. The Night Before Christmas is set on, you guessed it, Christmas Eve, as a family are preparing to settle down to sleep, but the father is intrigued by noises on the lawn outside...

It’s been set to music many times but the score by Philip Lane (b.1950) is perhaps the most popular. Apparently, he composed the work “in just over a week after seeing a picture-book version of the poem in a friend’s ‘childhood’ bookcase”. It’s a surprising turnaround as it’s beautifully done and definitely gives us plenty of Christmassy vibes (a bit like getting wrapped up in a big hug). Stephen Fry famously narrated the poem for the commercial recording of this score in 2006, so Owen, who has taken up the challenge for us, has big shoes to fill!

To get you in the mood, here are the celebrated words from The Night Before Christmas that you’ll hear Owen reading in our festive film, with music performed by the Royal Scottish National Orchestra, enjoy!

‘Twas the night before Christmas, when all through the house

Not a creature was stirring, not even a mouse.

The stockings were hung by the chimney with care,

In hopes that St Nicholas soon would be there.

The children were nestled all snug in their beds,

While visions of sugar-plums danced in their heads.

And mamma in her ‘kerchief, and I in my cap,

Had just settled our brains for a long winter’s nap.

When out on the lawn there arose such a clatter,

I sprang from the bed to see what was the matter.
Away to the window I flew like a flash,
Tore open the shutters and threw up the sash.

The moon on the breast of the new-fallen snow
Gave the lustre of mid-day to objects below.
When, what to my wondering eyes should appear,
But a miniature sleigh, and eight tiny reindeer.

With a little old driver, so lively and quick,
I knew in a moment it must be St Nick.
More rapid than eagles his coursers they came,
And he whistled, and shouted, and called them by name!

As dry leaves that before the wild hurricane fly,
When they meet with an obstacle, mount to the sky.
So up to the house-top the coursers they flew,
With the sleigh full of Toys, and St Nicholas too.

And then, in a twinkling, I heard on the roof
The prancing and pawing of each little hoof.
As I drew in my head, and was turning around,
Down the chimney St Nicholas came with a bound.

He was dressed all in fur, from his head to his foot,
And his clothes were all tarnished with ashes and soot.
A bundle of Toys he had flung on his back,
And he looked like a peddler, just opening his pack.

His eyes-how they twinkled! his dimples how merry!
His cheeks were like roses, his nose like a cherry!
His droll little mouth was drawn up like a bow,
And the beard of his chin was as white as the snow.

The stump of a pipe he held tight in his teeth,
And the smoke it encircled his head like a wreath.
He had a broad face and a little round belly,
That shook when he laughed, like a bowlful of jelly!

He was chubby and plump, a right jolly old elf,
And I laughed when I saw him, in spite of myself!
A wink of his eye and a twist of his head,
Soon gave me to know I had nothing to dread.

He spoke not a word, but went straight to his work,
And filled all the stockings, then turned with a jerk.
And laying his finger aside of his nose,
And giving a nod, up the chimney he rose!

He sprang to his sleigh, to his team gave a whistle,
And away they all flew like the down of a thistle.
But I heard him exclaim, ‘ere he drove out of sight,
“Happy Christmas to all, and to all a good-night!”

🎄 The Night Before Christmas 🎄 in partnership with the Royal Scottish National Orchestra and sponsored by La Bonne Auberge is available for free until Monday 11 January 2021 (on our Facebook page, YouTube channel and the STV Player).